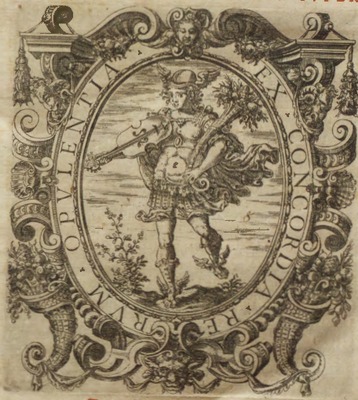 Mercury, walking in a flowery meadow, holds a cornucopia in his left arm and a violin in his right. Motto: Ex Concordia rerum opulentia .

"...the brand was created especially for the new company that underwrote Apud Bibliopolas Socios which was formed in 1573 by Domenico Basa with booksellers Giorgio Ferrari, Brianzi Brianza, which drew up an agreement for the press and the sale of books published by the Roman people. The meaning of the motto and obvious, Mercury and always the protector of businesses; with the addition of a new element, the violin, they mean the harmony between the members and the cornucopia abundance and prosperity that they hope the new entity."

"...the porcupine emblem, like the animal who knows how to defend against attacks, and was made famous by King Louis XII of France, who used it with the motto Cominus et eminus relating why porcupines hurt both those who bump into it and those who threaten it; in fact the shaking launches its quills that hit the opponent as lightning. The Bonfadini has always used the porcupine as its brand and gave the meaning of someone who only hurts if bitten."