The Studio of Alexander Gardner 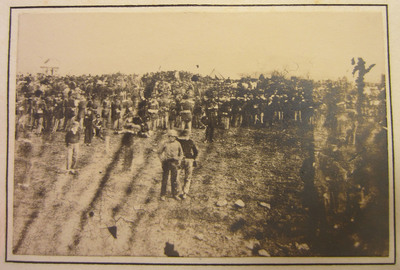 This is a photograph of the ceremony on the occasion of “Lincoln’s Gettysburg Address.” The speakers’ platform on which Lincoln is sitting is located in the far background, and this photograph depicts the scene from a great distance. This photograph was cropped from the original, which was a stereoscopic photograph. It was printed in a size that resembles the carte-de-visite photographs that were popular in the second half of the nineteenth century and was pasted in the Meserve book. Professor Christopher Oakley believes that Lincoln can be seen in a much enlarged version of this photograph in an area of the crowd on a line drawn above the right elbow of the boy with the light-colored shirt and hat in the middle foreground. Oakley also believes that the man wearing the hat in the foreground on the right is the photographer Alexander Gardner, who is credited with this photograph. An associate of Gardner actually took the picture. See http://www.smithsonianmag.com/history-archaeology/Interactive_Seeking_Abraham_Lincoln_at_the_Gettysburg_Address.htm.