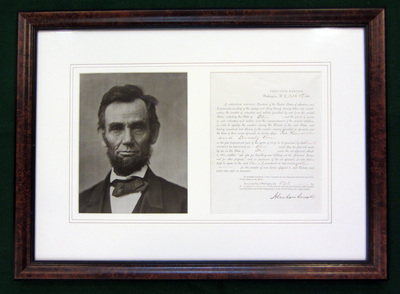 Partially printed document signed “Abraham Lincoln” as President, from the “Executive Mansion, Washington, D.C., Sept. 5th 1863.” The document measures 7 x 9 inches matted and framed. It is accompanied by a matted and framed photograph portrait of Lincoln by Alexander Gardner, commonly referred to as the “Gettysburg Portrait.” The portrait also measures 7 x 9 inches.

On March 3, 1863 the U. S. Congress, due to the dwindling of Union volunteers, passed the first effective draft law. All men between the ages of 20 and 45, with certain exceptions, were enrolled in the draft lottery. However, a man could avoid service by paying a $300 fee or hiring a substitute. One consequence of the conscription law was the draft riots that broke out in New York City in July of 1863. This document, signed by Lincoln 6 months after the institution of the draft, called up 621 men from the Eleventh Congressional District of Ohio. At that time, the following southern Ohio counties were in that district: Adams, Gallia, Jackson, Lawrence, Scioto, and Vinton. Alexander Gardner originally took the “Gettysburg Portrait” of Lincoln on November 8, 1863, two weeks before Lincoln’s “Gettysburg Address.”