Draft Order from the American Civil War, Detail A, Order Itself 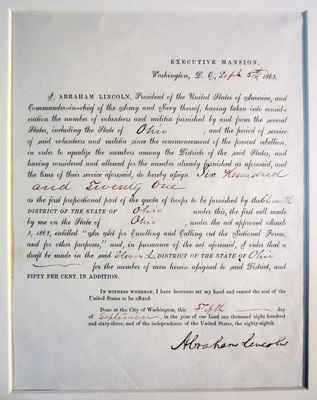 This item is a detail from the Draft Order from the American Civil War, signed by Abraham Lincoln, September 5, 1863.

The body of the order reads as follows: “I, ABRAHAM LINCOLN, President of the United States of America, and Commander-in-chief of the Army and Navy thereof, having taken into consideration the number of volunteers and militia furnished by and from the several States, including the State of Ohio, and the period of service of said volunteers and militia since the commencement of the present rebellion, in order to equalize the numbers among the Districts of the said States, and having considered and allowed for the number already furnished as aforesaid, and the time of their service aforesaid, do hereby assign Six Hundred and Twenty –One as the first proportional part of the quota of troops to be furnished by the Eleventh DISTRICT OF THE STATE OF Ohio under this, the first call made by me on the State of Ohio, under the act approved March 3, 1863, entitled ‘An Act for Enrolling and Calling out the National Forces, and for other purposes,’ and, in pursuance of the act aforesaid, I order that a draft be made in the said Eleventh DISTRICT OF THE STATE OF Ohio for the number of men herein assigned to said District, and FIFTY PER CENT IN ADDITION.”